Observing the course of an economy over long periods of time, we will see that it is sometimes growing, sometimes decreasing and sometimes stagnating. There are changes, which in fact show a systematic circularity. Of course, although economic cycles are repeated, they are not the same regarding to their intensity and duration. The stages of the economy during the cycle have common characteristics and are commonly called economic cycle phases. There are two main phases that the economy is going through during an economic cycle: the phase of growth or blossoming and the phase of the downturn or recession.

{The coins that belong to this category can be a relatively secure investment in the medium term and in the long term. We should not be affected from a temporary drop in their price, as we should expect an increase afterwards. Our attention should be focused on the timing of the purchase, as buying a currency should be avoided when its price is close to its “All Time High (ATH)”. Patience is a virtue both on buy and sell. The key to understanding economic cycles is the evolution of the profit rate on which the investors’ activity depends.} 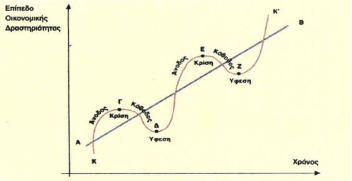